ALCATEL LUCENT – A STAR IS BORN!

When Alcatel and Lucent merged, a new recognition program was launched to recognize and reward employees for a job well done.

Vision2Voice Communications understood that recognition is about demonstrating appreciation for excellence. Recognizing that an employee did something special and contributed to the success of the organization is every bit as important as the reward itself. In fact, studies show it is more important. We thought, regardless of the amount of the award, communications should focus on the element of recognition, build positive energy, and excite employees.

The name of the program was called Night Out and our approach was to play on the theme of a night out, recognizing that every person probably has a different idea of their ideal night out (could even be a nice brunch). And while the reward was not as generous as the potential rewards under the former Alcatel program, using the concept of a star, builds on the idea that you are rewarding an important contribution and that the money can be used for a special treat. And, it tied in nicely with the name of the program.

A Star is born – Creative

We introduced the concept that employees receiving the award would be considered stars in the eyes of the organization. Now who doesn’t want to be a star? We chose an illustration that tied in with this theme of people celebrating in front of a stage under a starry night sky. The text played on the theme – “Reach star status, and we will reward you with a night out!”

The creative was used in a number of elements including: 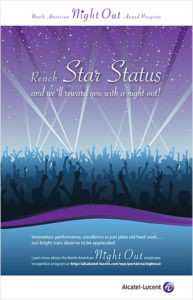 Banner Ad and Other Web Graphics

Internal communication is NOT company news.

Our eBook shares our unique formula for driving business success. Download it today and sign up for updates on the latest news and trends.

Internal communication is NOT company news.

Our eBook shares our unique formula for driving business success. Download it today and sign up for updates on the latest news and trends.